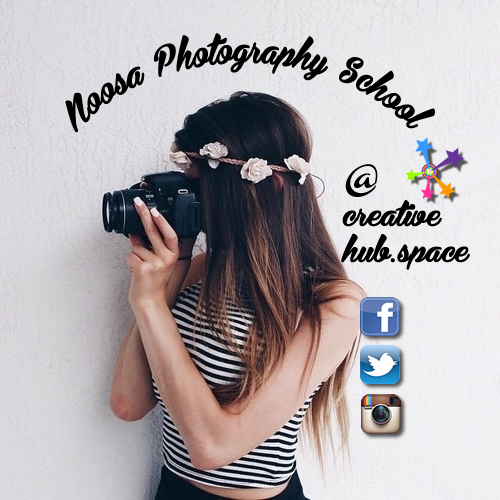 The Noosa Photography School launches at Creative Hub Space in Doonan with an Information Afternoon. This session will give you the lowdown on our full range of photography courses teaching you how to use your Digital SLR camera to make great photos.

The courses will be outlined by Colin Beard head teacher and Helen & Nicholas the Photography School Directors encourage you to stay for wine and nibbles at the end.

We offer a range of courses including: Fashion photography, portraiture, landscape, night photography, photojournalism and creative writing and our non themed courses take you from beginners to advanced levels of knowledge.

Our Masterclass in Photography is open to professionals or advanced photographers with demonstrated knowledge of their craft.

All classes are taught by master photographer Colin Beard. View some his work www.colin-beard.com Register to attend this session via email: learn@creativehub.space so we can cater for you!

We look forward to seeing you there! If you can’t make it register your interest in the courses so we can keep you in the loop!

https://twitter.com/ACreativeHubA master of light, Colin Beard brings to photography a unique sensibility that embodies superb craftsmanship and creative energy. from a review in the Sydney Morning Herald by Robert MacFarlane, March 1994

Over his long career Colin Beard has worked in many fields of photography always at the highest level. He began photography in the mid sixties as a founding member of Australia’s first Rock��_��__��_n Roll Magazine, Go-Set and subsequently worked in UK and USA.

For many years he has been one of Australia’s most prominent Fashion and Advertising Photographers, working on many major national and international accounts for which he earned many photography awards world-wide. He freelanced extensively for numerous leading fashion magazines Vogue��_��__��_, Dolly��_��__��_, Cleo��_��__��_, Pol��_��__��_.etc. producing numerous covers and fashion spreads.

He began teaching in 1977 as a founding member of the staff of The Sydney College of the Arts where he designed and introduced undergraduate and post-graduate courses in Photography and in Design.

He later joined the staff of the Design Faculty of The University of Technology, Sydney, again introducing many new courses in Photography. At UTS he was instrumental in the development of the digital photography studios and in the conversion of the design programme to digital technology.

Alongside his academic activities, he is a highly regarded Photojournalist, working extensively for The Sydney Morning Herald, The Bulletin magazines and he was the first photographer to be commissioned for Australian Geographic magazine.

He was selected as one of the 100 international photographers representing Australia in the book A Day in the Life of Australia��_��__��_. His photographs of Australian rural culture are predominantly featured in the displays and AV presentations at The Stockman’s Hall of Fame in Longreach.

One of Colin’s outback images features in thousands of new Australian passports. The image is of a Victorian high plains stockman bringing cattle down to the Kiewa valley for the winter. Colin took the image (while on horseback himself) in 1980. The designer of the Australian passport noticed saw the image in the book, The Mountain Men written by James Cowan and illustrated by Colin. Colin’s iconic image is one of several hundred of outback themes on display at the Stockman’s Hall of Fame at Longreach.

He has delivered guest lectures at universities throughout Australia and in the UK and Italy. Throughout 2001/2002 he was principal teacher for the Australian Geographic Photography Workshops in Sydney.

He has several book projects ready for publication with T&G Publishing Sulle Tracce di San Francesco��_��__��_; following the footsteps of Francis of Assisi in photographs and text Rock��_��__��_n��_��__��_Roll Odyssey; a journey through the popular music of England and USA in 1967 (photos and text) Landscape, Culture and Myth in The Yorkshire Dales��_��__��_; an intimate look at the fading mono-agricultural communities in a small region in the north of England (Photographs and text).

Follow our socials to stay up to date with SCCA events and opportunities.

Sign up to our newsletter to be the first to hear about events and artist opportunities.